Can Alcohol Contribute to Joint Pain?

When enduring the discomfort of arthritis, anything that can reduce the unpleasantness of joint pain should be considered. However, it has become a common trend for sufferers to use alcohol as a way of numbing the aches and pains, but is this wise?

Alcohol Can Reduce Feelings of Pain

Pain sensations are felt in the brain. When we drink alcohol, it calms the nerve activity within the brain, reducing any pain sensations we may ordinarily feel. ‘The Journal of Pain’ published in December 2016 found that alcohol does act as an analgesic. The study found that when more alcohol was administered, the painful stimulation needed to be increased to be perceived as pain. This study thereby concluded that the higher the levels of alcohol in the blood, the more an analgesic effect was felt. 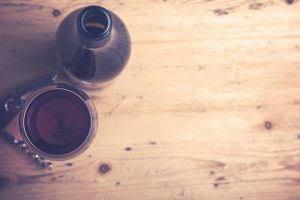 The Complicated Relationship Between Alcohol and Pain

Often, people with conditions with high levels of pain will self-medicate with alcohol because of its analgesic effects. In 2009, ‘The Journal of Pain’ reported that approximately 25% of adults with various forms of arthritis, used alcohol as a way to alleviate their symptoms. Unfortunately, many people become alcohol dependant because of the length of time they have used it to ease their chronic joint pain. As time goes on, the amount of alcohol needed to reduce the painful symptoms increases, as the tolerance to the alcohol rises. It has been reported that when alcohol is used in this way for an extended period of time, the painful symptoms can actually be exacerbated by the alcohol, instead of continuing to have an analgesic effect.

Excessive Use of Alcohol is Bad For Your Health

In the short term, alcohol can be responsible for accidents, uncharacteristic behaviour, violence and alcohol poisoning. In the long term, liver and heart disease, strokes, mental health problems, cancer of the mouth, throat, liver and colon remain prevalent. Even drinking alcohol in moderation can encourage various cancers and illnesses.

Alcohol Can Interact With Medication

It’s generally known that drinking alcohol while taking pain killing medication is never a good idea. It can cause liver damage, stomach ulcers and bleeding. Certain other medications can be fatal when mixed with alcohol. Drugs used for anxiety, depression, heartburn and high blood pressure can affect how they react in the body, causing impaired breathing and changes in blood pressure, which could be life threatening.

It is Not Recommended to Use Alcohol to Treat Joint Pain

Because of the wide ranging health risks, it is not recommended that people use alcohol as a way of managing their joint pain. The risks far outweigh the benefits of the analgesic effects, which can be found in many other more natural and safer remedies. Help from a doctor should be sought if alcohol is being used on a regular basis to ease symptoms of joint pain, they will be able to advise on better remedies which are far less harmful to your overall health.